The two 8-foot-tall monuments stand nearly finished with only details left for Jansen to complete as she prepares for a public unveiling on Sunday, October 9, from 2:00 – 4:00 p.m. at the carving site.

The elaborate figures in both sculptures are carved in relief against gently spiraling columns and are framed by 2-foot-wide engraved capstones bearing the images of sacred geometry. Upon viewing them, one is struck by the delicacy and harmony the pieces transmit. They are indeed among the softer, more subtle of all Jansen’s work. Named Pillars of Providence, these lyrical, illustrative pieces nonetheless pack a powerful message – perhaps even a plea – for humanity to reclaim a proper balance and interconnectedness with the Earth. 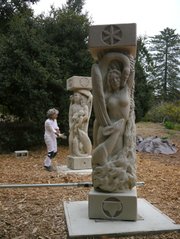 The two pillars abound with myth and metaphor, “enough to keep Joseph Campbell busy for a week if he were still alive,” joked Francis. And this is not much of an overstatement once the rich symbolic content of the images is reviewed. The effect is gently enlightening as one allows the eyes to wander through the work, which, like a painting, tells a story of deep reverence, innate intelligence, and intimate connection.

One pillar features a tree in strong relief with sinuous, textured bark growing symbiotically beside the great mother, helping to convey a message of grounded strength, love, and sensuality; and the third figure in this piece, a wise woman depicted with eyes closed, represents higher intelligence and intuition. “She is connecting introspectively to the night wisdom — symbolized by the owl beside her — which penetrates both the unknown and the unknowable,” explained Jansen.

“All my work has a humanitarian message,” said Jansen, “and [Pillars of Providence] is a message from the natural world meant to inspire a transformation of consciousness in humanity before we witness more grievous, destructive changes. It is a message about the higher order existing in nature and in the profound sentience of all living things. This sentience is asking humans to have equal honoring for all life and to understand the right of all species to their place on the earth.” After all, she added, “If we go down, we take them with us.”

This is not a new story. Francis first amazed the Santa Barbara community in 1993 with her striking monument Transformation through Forgiveness placed just across the street from the Santa Barbara Mission. The towering 13-foot-tall sculpture featured the ennobled physique of a Native American man flanked overhead by the wings of a great bald eagle. It was a controversial placement of a controversial work and not least because it conveyed the message that healing was both possible and necessary between the descendants of the first people of this land and the rest of the non-native occupants. 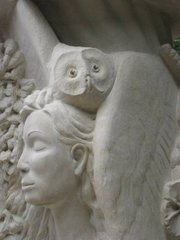 Less than 70 yards from theTransformation through Forgivenessinstallation lay the mass grave of several hundred Chumash interned in the 1800s in the historic cemetery adjacent the Mission. This made the placement of the monument more poignant. But the most grievous controversy, it turns out, was discovering that some Native Americans felt Jansen, an immigrant to this country, did not have a legitimate right to speak for them.

Those who know Jansen can only enjoin her detractors to understand that these meta-themes choose Jansen long before she chooses them. For example, it was in a marble quarry in Pietrasanta, Italy where Francis first saw the Native American figure in Transformation through Forgivenesslatent in the raw stone, later to be elegantly rendered into form through her intention, talent, and sweat. If there was a singular point of view to be identified in this work of art, it is the honoring of the Native American spirit undertaken with love by an artist who understands that her first priority is to listen.

Likewise, other of Jansen’s sculptures, including Heralding the Dawn and The Gathering inspired by the core group gatherings of The Foundation for Conscious Evolution in Santa Barbara, were images Francis first “saw” in the stone and then set about manifesting with her chisels and drills.

Barbara Marx Hubbard, friend of the artist and founder of the Foundation for Conscious Evolution, said, “Francis’s magnificent sculpture is a natural force for co-creation. It lifts us into an energetic trajectory to the next stage of our evolution.” Indeed, it is as if the stone is singing, the life force is so palpable.

In a restored state, man is healed from a state of separation from Nature, from the sense of lack that has contributed to humanity’s destructiveness, said Jansen. In Pillars, it is the man who holds the future – represented by the cheerful baby – in his strong, easy grasp.

“I’ve given him lots of helpers,” said Jansen, “and the bison, here, is perhaps the most important.”

Historically, the bison and humans were synergistic, and the hunter knew to take “just what was needed.” The bison was honored by Native Americans who depended upon it for food and many resources essential to their survival. Recapturing the gratitude and respect for life exemplified in this relationship is one of the layers of meaning Pillars conveys.

Born in the Netherlands to Dutch parents, Jansen moved to Australia when she was just six years old. To adapt successfully to her new surroundings, Jansen learned to listen more carefully. She listened to the “underneathness,” she said, “to what people really meant because, at least to begin with, I couldn’t understand their words.”

Jansen is a self-taught sculptor. She doesn’t draw and she doesn’t use models. When asked where her ability comes from, she will tell you that her intuition has been her teacher – intuition, and consciously cultivating deep listening.

Jansen celebrated her 65th birthday this month, just two weeks before the monument’s formal unveiling. Perhaps this is why she has begun to focus upon her artistic legacy, and ask again: How can this art encourage transformation and positive change?

Jansen is a lover of the great outdoors. The long hours she spends at her work, in a clearing tucked under trees at Casa de Maria, is time she spends alone building her own rapport with the mythical beings which she is bringing into expression in the limestone rock. Often the work is strenuous and tiring; often the pace is demanding yet slow. It feels as if only her sustained intention and her careful listening for guidance will bring the images forth within the folds of beauty and grace which they require.

She recalled a coyote walking silently by one day at dusk. He came out of the orchard and stood revealed in the open meadow. Next, he walked slowly by her, unruffled at being seen, and then was gone.

“I believe he was showing his approval,” she said.