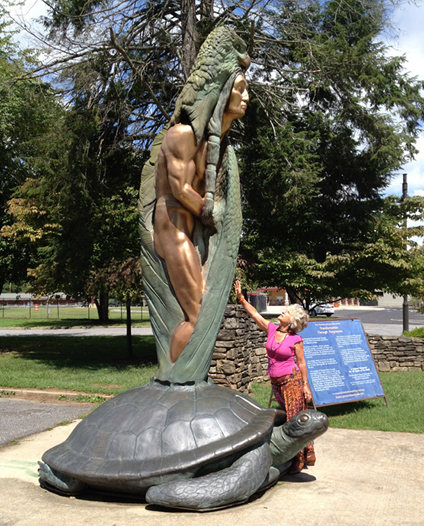 The Monument to Forgiveness was donated to Northeastern State University in Tahlequah, OK, which is at the end of the Trail of Tears.

Dedicated to Earth
Awareness and Stewardship

This monument brings awareness
of human interdependence
on the Earth’s environment,
not only for our own sustenance and survival,
but also for that of all life forms.

Our relationship with the earth is a partnership,
requiring our respect, honor and active stewardship.
In return, we receive its miraculous life support systems and resources.

We are called to recognize that we need to restore balance
in our relationship with the Earth and each other,
and so to act, that future generations may survive and thrive.

The Monument to Forgiveness uniquely honors the essential contribution of all indigenous peoples. And now, as our contemporary world is woven of many cultural expressions, we are being called to embrace all expressions as part of a greater whole.

The monument became a popular local attraction, with flowers, eagle feathers, Native American Sun-dance ribbons, forgiveness-letters, fruit, and many other gratitude objects, left daily around the base in acknowledge of the purpose and meaning for reconciliation and forgiveness that the “Forgiveness” monument held for the populace.

The Traveling Bronze Forgiveness Monument, a 14-foot tall replica with a large Turtle for its base was created and is touring our nation petitioning Forgiveness for our for-fathers, and then all of our fathers.

The Monument to Forgiveness has reverently and prayerfully traveled to:

On the concrete base on which the monument is placed.

The Monument was created by Dutch-born visionary sculptor Francis H. Jansen. It was gifted to Northeastern State University to honor Tahlequah as the End of the Trail of Tears. “To inspire, evoke and encourage in all humankind the spirit of reconciliation, transformation, and unity through forgiveness”.

This Monument is part of a Spirit-driven endeavor to bring awareness, and where possible, to help alleviate the imprint of suffering that has occurred at specific places stained by “man’s inhumanity to man”. It represents the sculptor Francis Jansen’s gesture of reconciliation on behalf of her European Ancestors to the First Peoples of this continent.

The Trail of Tears, called” Nunahi-Duna-Dio-Hilu-I” by the Cherokee for “Trail Where They Cried”, was a deeply tragic journey during which more than 100,000 Native Americans –- Creeks, Chickasaw, Choctaw, Seminole, and Cherokee—were forced from their native lands. Tahlequah is the site of one of the final destinations of this forced 1000-mile march.

Northeastern State University has graciously accepted stewardship of the Monument and provided “hallowed ground” where visitors may be inspired to acknowledge, contemplate and participate in ceremonies of reconciliation and forgiveness.

The Monument to Forgiveness stands as an invitation to all humankind to embrace healing through forgiveness so that we may join in unity to create a more peaceful, compassionate and sustainable future.