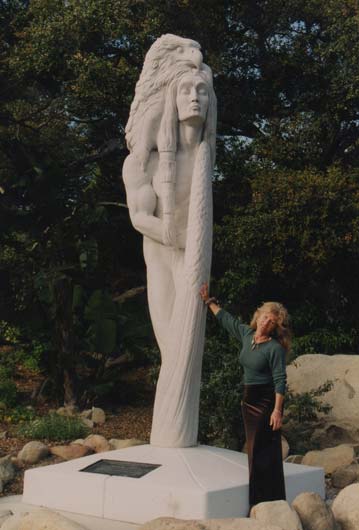 Update: The Transformation Through Forgiveness monument was destroyed in the Montecito Mudslide on January 9th, 2018.

Italian Marble
8 Ton.
Dimensions: 12 Feet Tall.
The Monument to Forgiveness uniquely honors the essential contribution of all indigenous peoples. And now, as our contemporary world is woven of many cultural expressions, we are being called to embrace all expressions as part of a greater whole.

While there, the monument became a popular local attraction, with flowers, eagle feathers, Native American Sun-dance ribbons, forgiveness-letters, fruit and many other gratitude objects, left daily around the base in acknowledge of the purpose and meaning for reconciliation and forgiveness that the “Forgiveness” monument held for the populace.

The Traveling Bronze Forgiveness Monument, a 14-foot tall replica of the Transformation Through Forgiveness monument with a large Turtle for its base was created and is touring our nation petitioning Forgiveness for our for-fathers, and then all of our fathers. It stood for several years at “The End of the Trail of Tears” in Talaquah, Oklahoma.

It has also been installed at the Southern Oregon University at Ashland, Wallowa Lake, Nez Perce country, and at “The Beginning of the Trail of Tears” in Cherokee North Carolina.

The traveling bronze forgiveness has reached its final destination and is now permanently placed at Northeastern State University in Tahlequa Oklahoma, honoring as a memorial monument at End of the Trail of Tears.