Exemplifying the harmonious stewardship of Humanity, this monument impels us to awaken to our responsibility to guide and empower future generations to assume the role of caretakers and stewards for all of life on our beloved planet Earth.

The one became two from infinite oneness,
Two principals emerge as the pro-generators of all life.
The Masculine and the Feminine.

These divine images take the form of co-creator man and woman. Each has their unique and respective powers and purpose. Melding and cresting in euphoric union inwardly and outwardly, they meet the ever-new and ever-unfolding Earth.

The mathematical formulas of creation that govern universal manifestation capstone the sacred male and female figures of the Pillars. The sacred geometric patterns represent the creative forces of our universe and endow the figures with divine ability and purpose.

Francis’s inspiration for the Pillars of Providence is to give expression to our potential for a loving, deeply harmonious and peace-filled existence for us all. The masculine Pillar expresses a rich connectivity to creation and bears with grace and ease the role of guardian to the young, the innocent and the pure. This is a return to our first and most essential responsibility, to foster future generations towards their greatest benevolence. The masculine energy is a force of nature that is straight forward, powerful and direct, therefore he stands alone, bearing the baby in his arms and surrounded by his animal helpers. The feminine energy, which dwells within us all, has many striations and complexities. This is the reason why the female pillar is expressed in three forms, the mother, the virgin and the wise-woman. 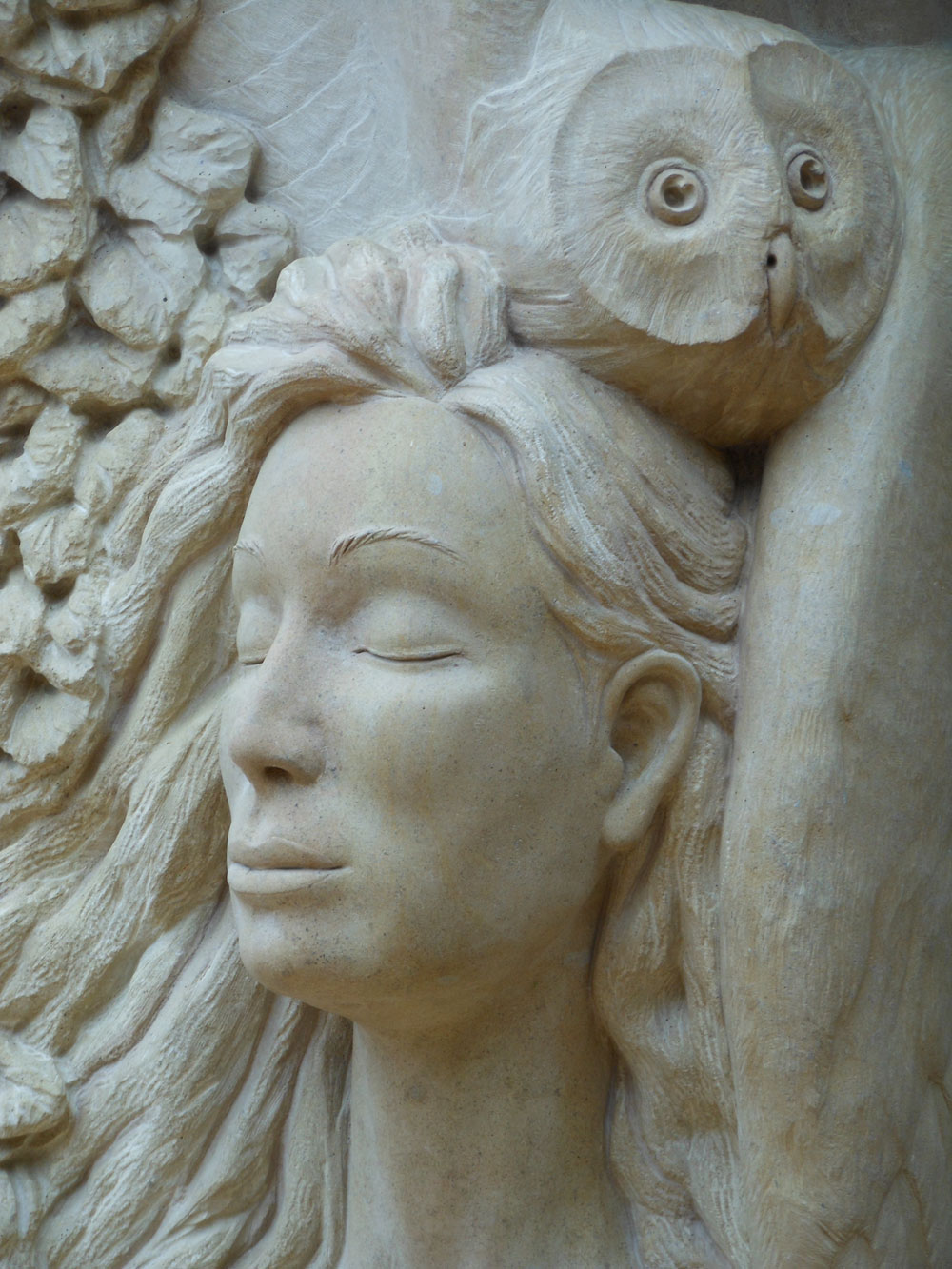 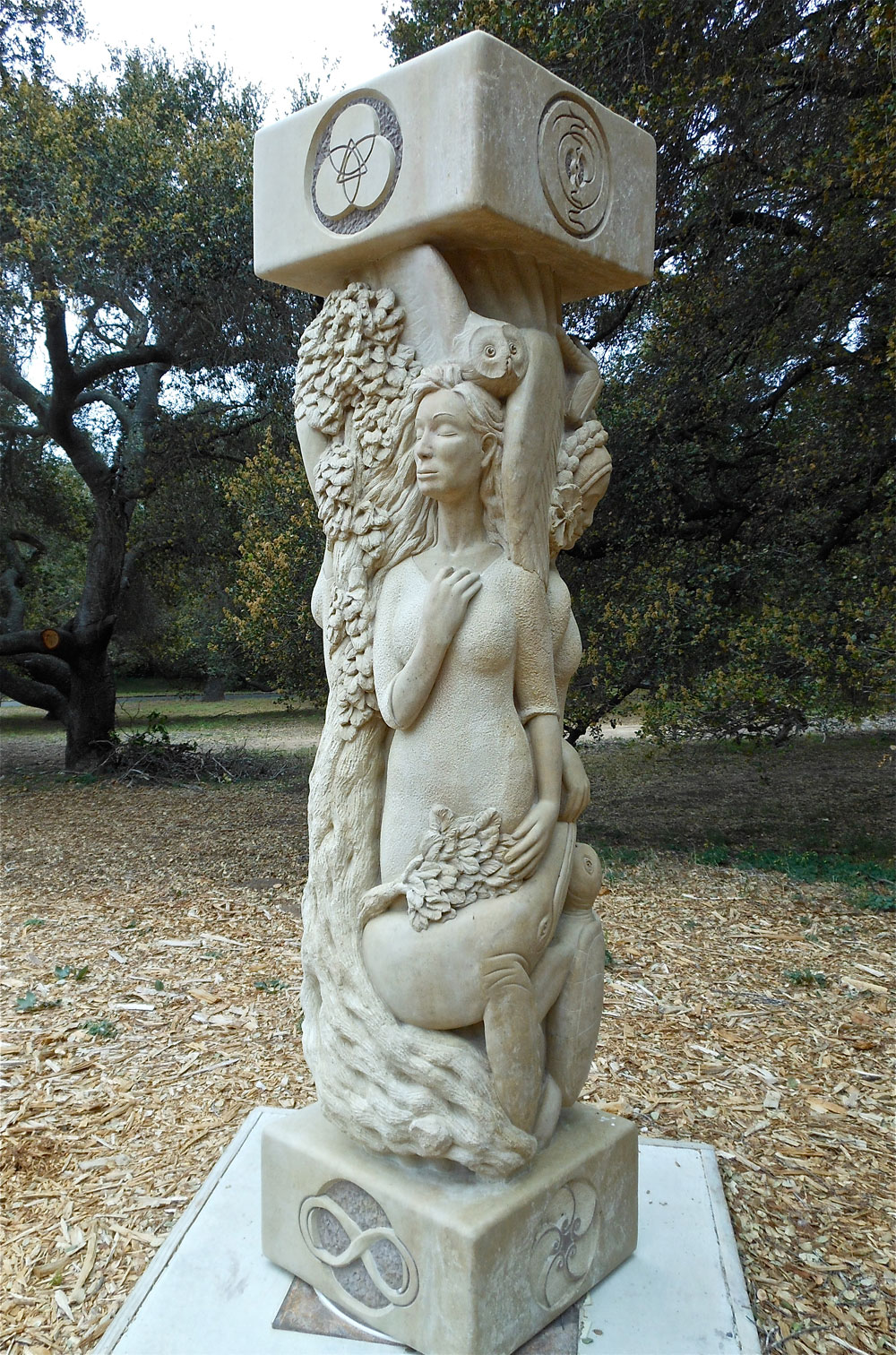 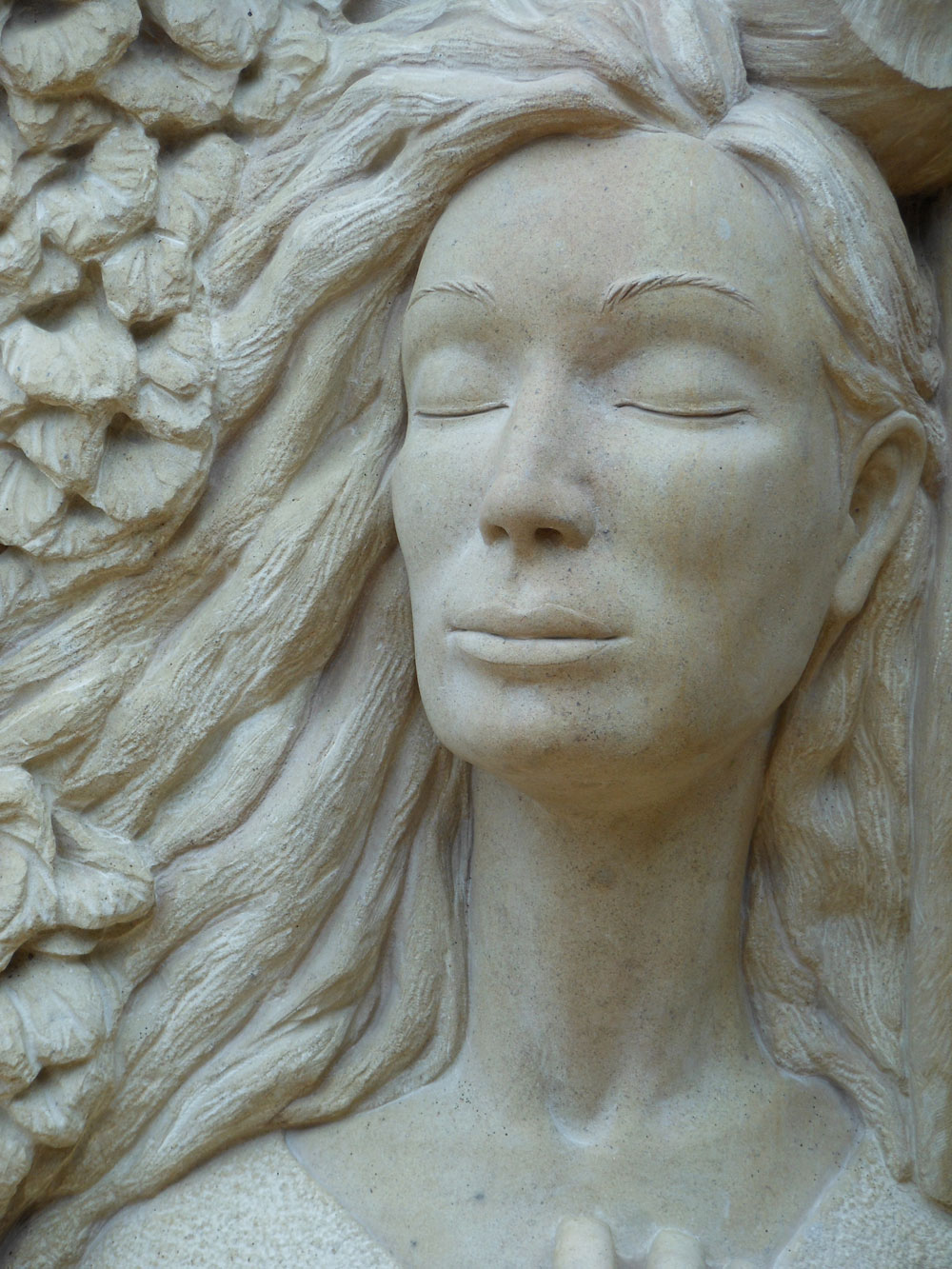 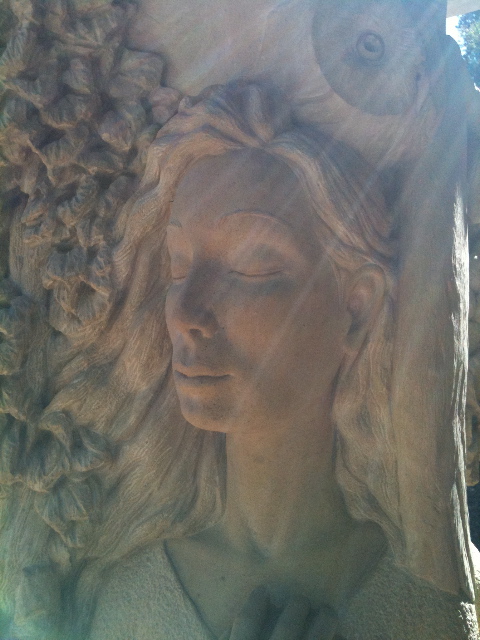 The third figure in the trilogy is depicted with eyes closed, in deep peaceful introspection, representing higher intelligence and intuition. Gently touching her heart with her right hand she is closed to outward stimulation, quietly centering herself within the power and grace that she commands. She connects to the night wisdom, symbolized by the owl hovering protectively above her, penetrating both the unknown and the unknowable. We see in her an ageless presence because the wisdom she embodies is not gained through linear time but by grace and accomplishment. This wisdom can be tapped into by any and all who consciously seek her.

The formidable Tree of Life to her right, a lush bough of foliage elegantly touches her womb, liberating the myth of Eve in the Garden. This Eve this “original woman” is transformed from the status of Sin and Shame, rebuked into that of the creative progenitor of life and liberator of consciousness through the knowledge of self worth. We receive a new myth allowing for a healed relationship for Man and Woman together as caretakers of the Garden. 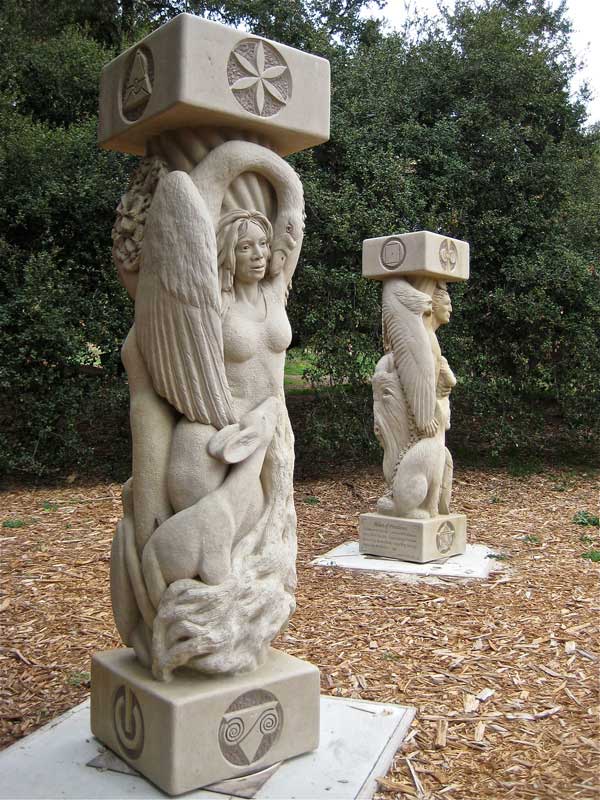 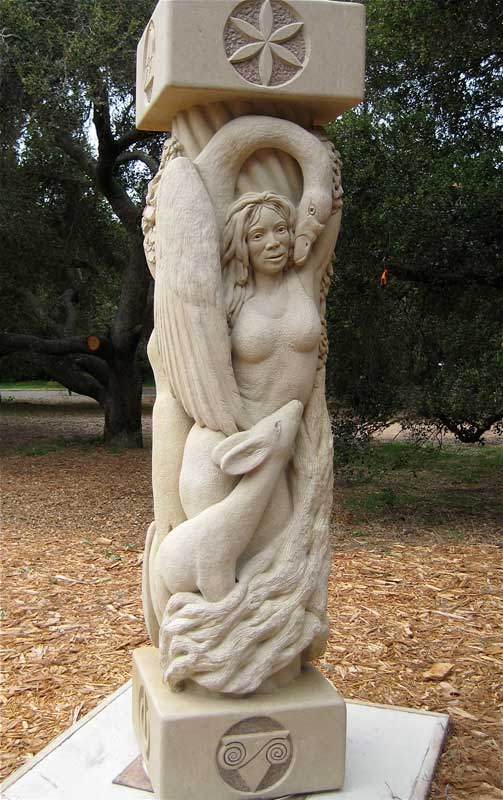 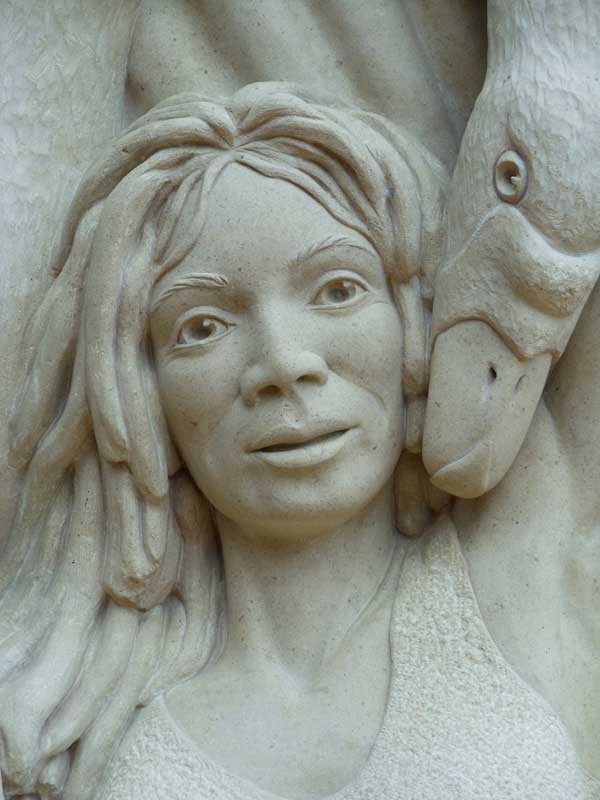 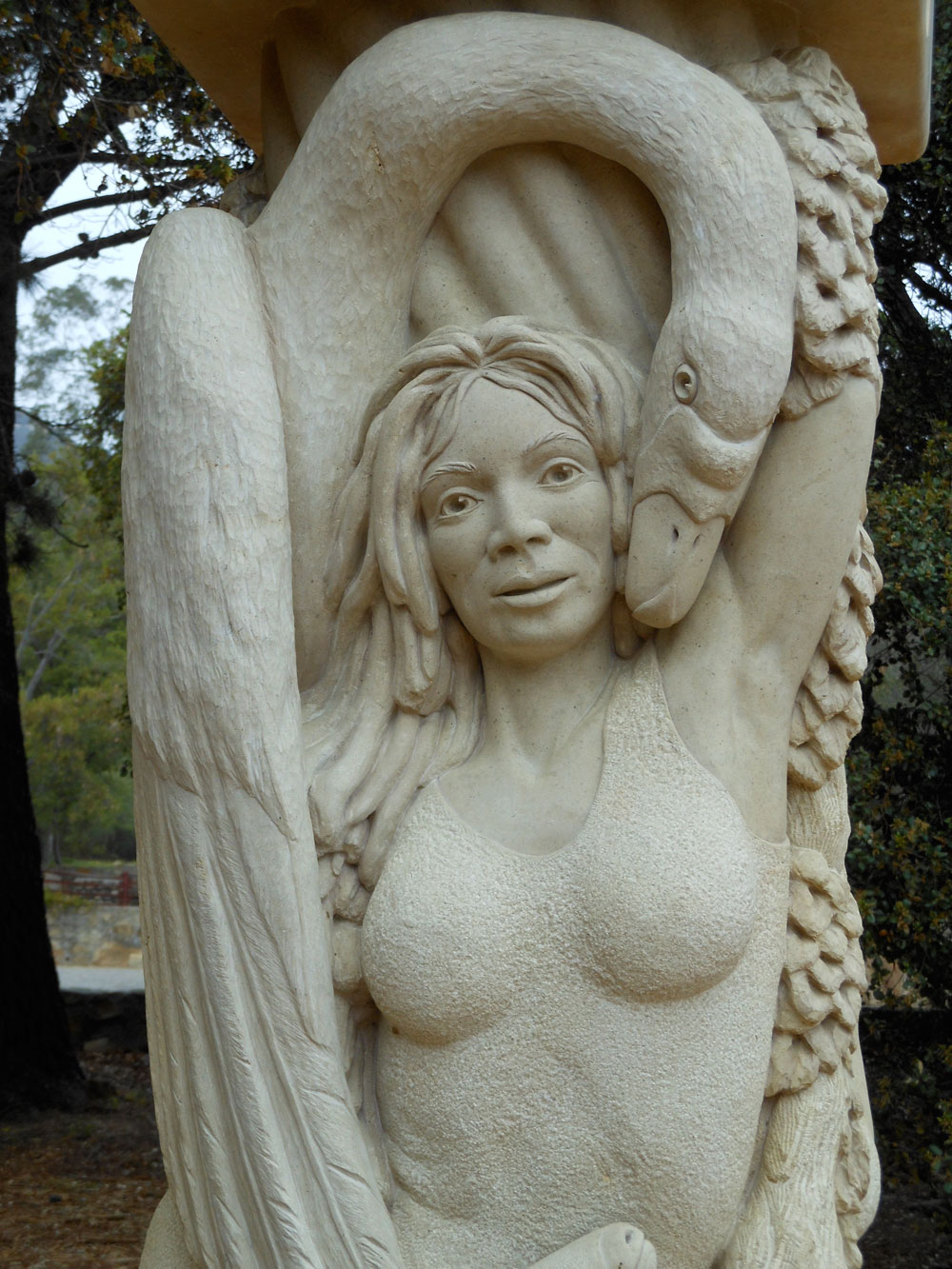 The mother Goddess figure is one of the trinity of the feminine principal, held within one of the two “Pillars”. This sensual, open eyed, energetic, aware and procreative figure with her hip thrust out in a evocative dance, is crowned at her head by the arching, languid neck of a protective swan, while at her belly rests the gentle snout of a young fawn. The Nature Kingdom framing of the human is thematic throughout the “Pillars” sculpture and connotes the concept of “Heaven and Earth”, the contact point where the mutual embrace of Creator and Created is witnessed and Affirmed within all the kingdoms.

Both the swan and the fawn are symbols of purity and evoke the mystical and emotional aspects of the divine feminine. The Tree of Life grows beside the woman from sinuous, spreading roots which convey a deep grounding in the vibration of the earth element, the core fecundity and life-giving nourishment of the Divine Mother of all living things. 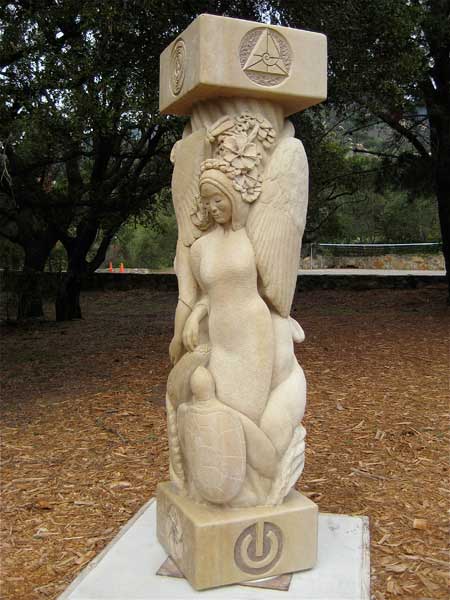 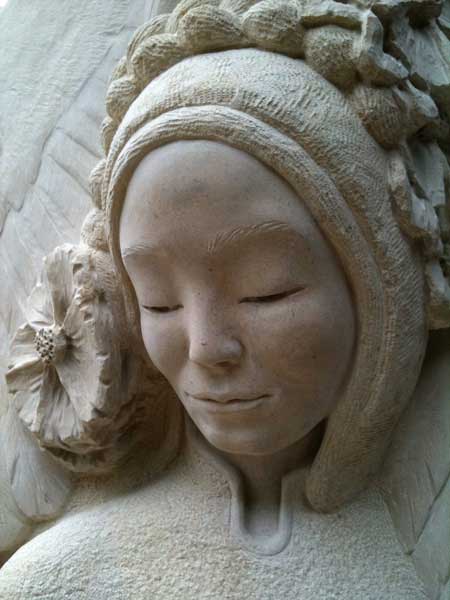 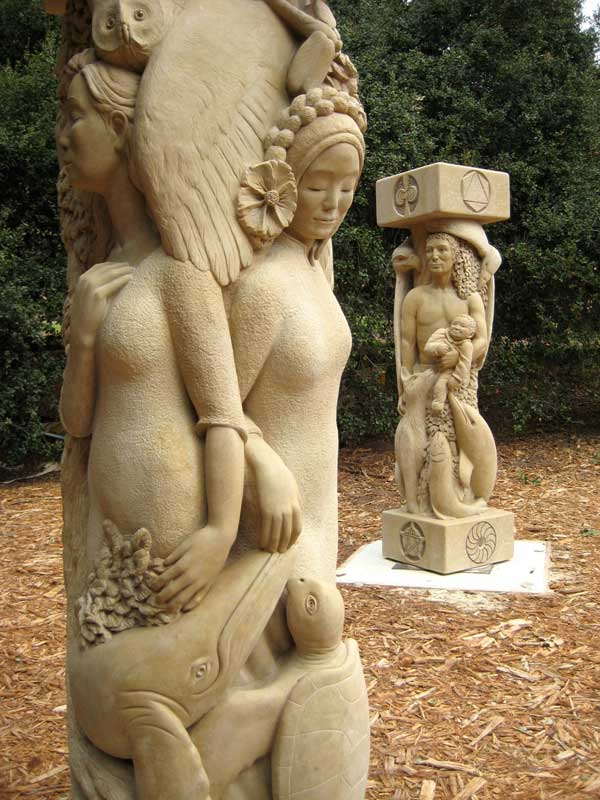 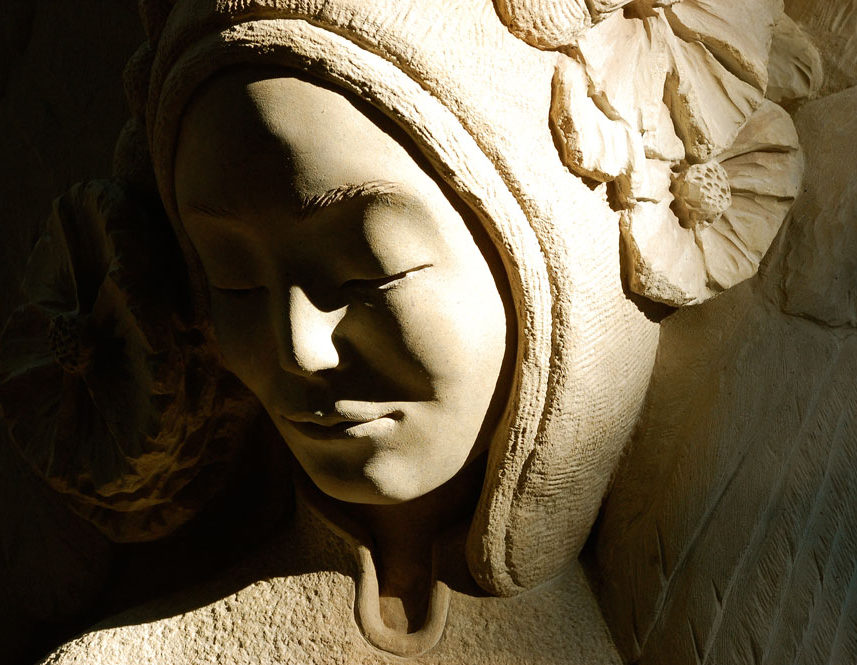 Unlike the Mother figure, the Maiden is demure and protected by her own innocence. She doesn’t stare alluringly into the eyes of the male counterpart but averts them. The beautiful ornamentations at her crown, the hibiscus and dragonfly, and the wings on either side, create a dramatic and alluring headdress. She is the enthralling potential of all life forms finding perfect and radiant expression through the careful nurturing of the precious soul qualities within.

She is sensitive, emotional and passionate. Her braided cap holds within all she is not yet ready for. She is virginal and holy. Her genetic heritage lies folded within the braid above her head, with the latent promise of what is to come. Below her the eager faces of the whale and turtle, keepers of the water-soul of our planet, each reaching up to her in encouragement for the “Providence”. of our healing. Like the dragonfly, emerging from the muddy waters metamorphosing into a delicate airborne creature, with rainbow-colored gossamer wings, the maiden represents purity in creation, the gift of the pure to transmit light into the entire world. 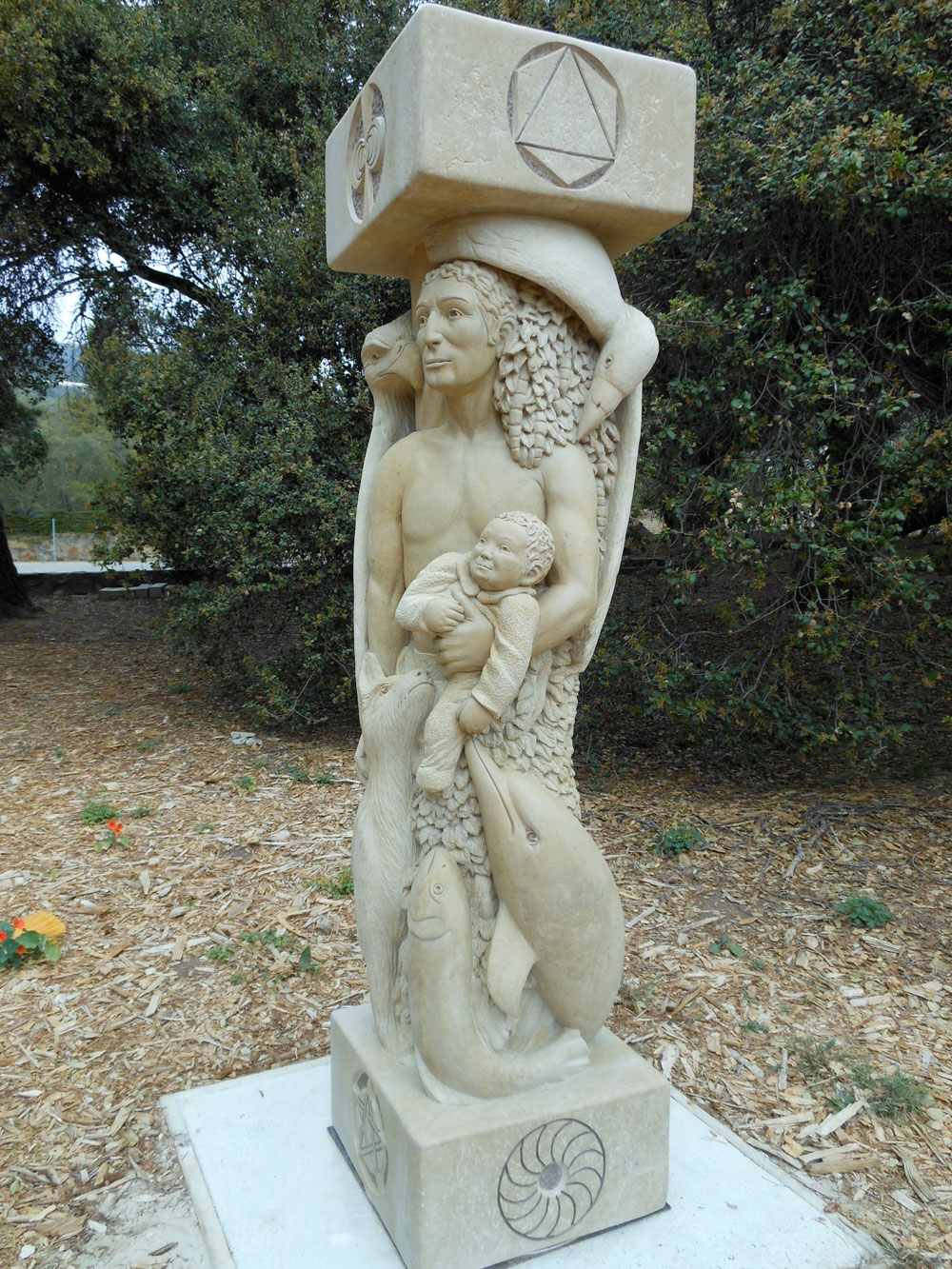 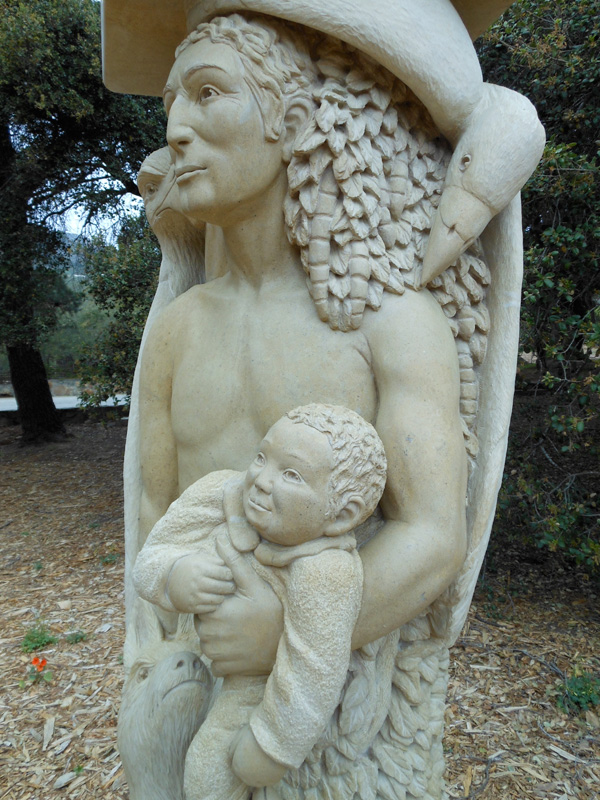 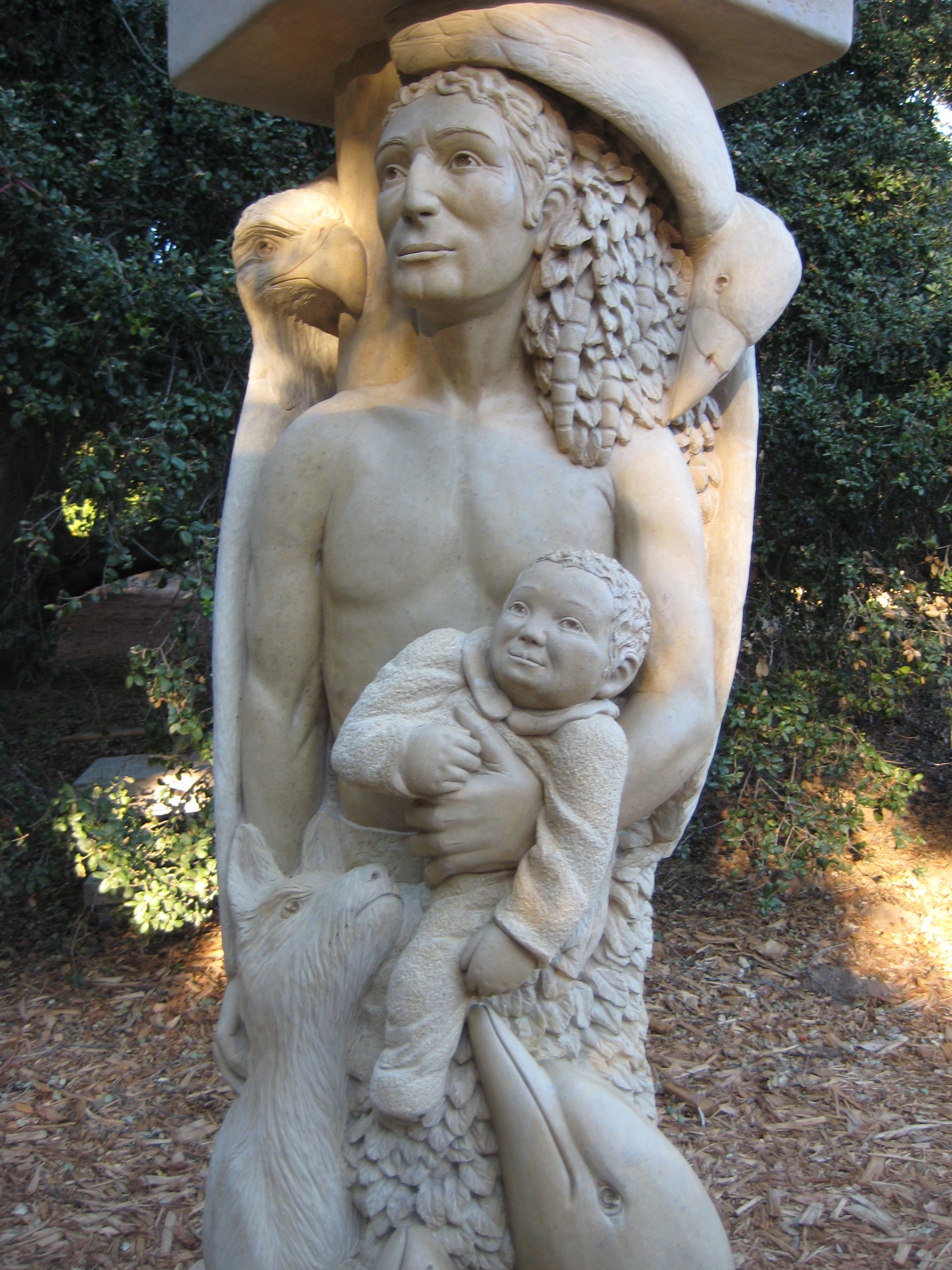 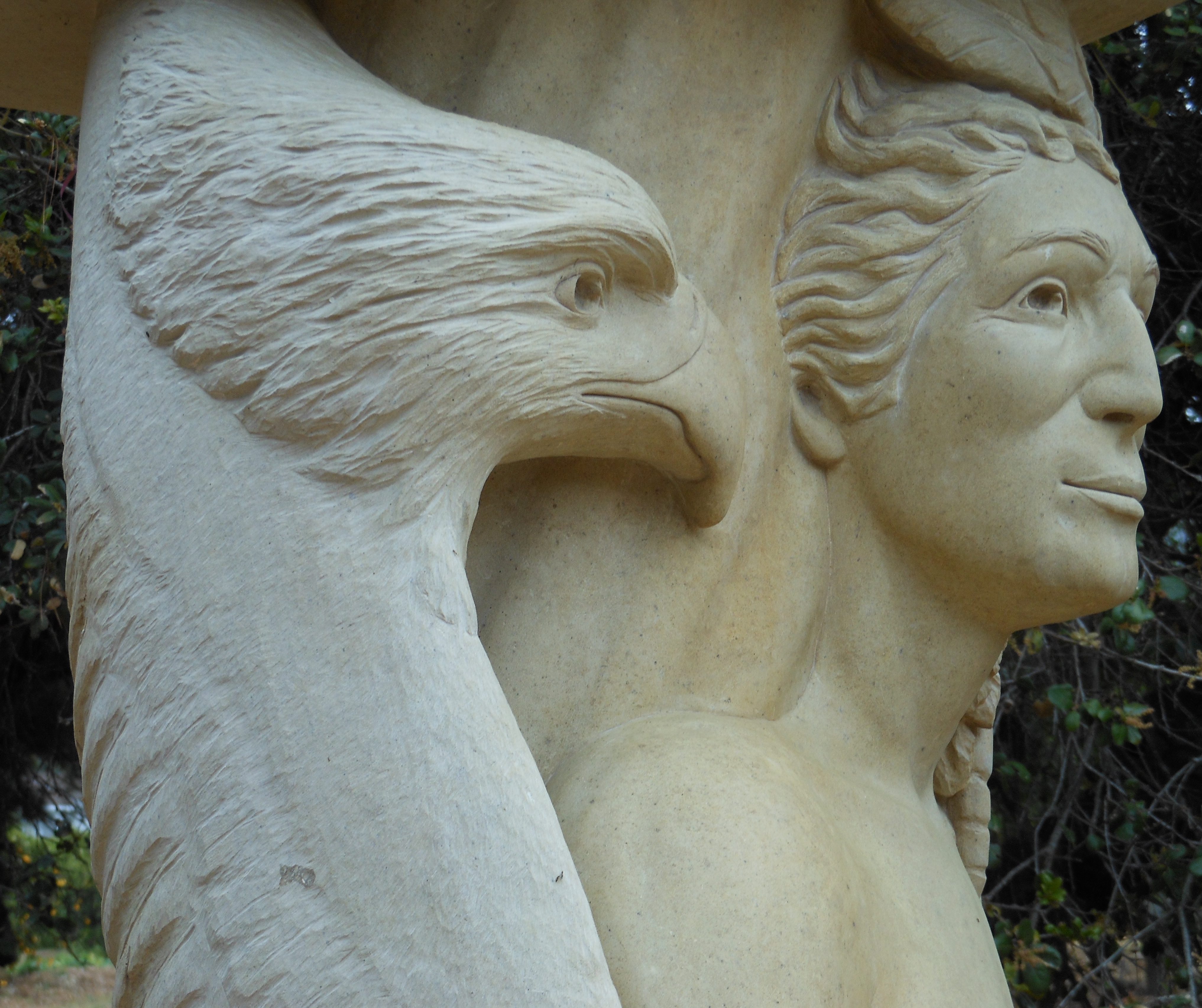 Protector, Provider, Nurturer, the Co-Creator man, as sacred partner of the Divine Feminine uplifts the second of the two Pillars of Providence. Standing alone the masculine being is joined by his animal familiars, the stately Buffalo, Wolf, Dolphin, Salmon, Raven, Eagle and Plant Kingdom, with whom he is capably engaged with his whole being, and through them with all of creation.

Like his feminine counterparts, this radiant and pivotally strong yet gentle man is a being of mythic standing within the Masculine principal. We see this evident by the abundance of vines laden with seedpods, which crown his head and flow into all he touches. It is the Male figures strong arms and hand that gently grasp the infant. This infant held with awareness, confidence and ease, showing us our future generations.

Eagle, messenger from a high, speaks to him of the ways of the Air. Lushe growths of vine and seedpods whisper teachings from the Earth. Dolphin and Salmon portray with eagerness their desire to assist and be listened to, with coming into alignment with the great ocean waters.The Buffalo has the man’s back, portraying with deep meaning prosperity and abundance. Historically the Buffalo and humans were synergistic. The hunter knew to take “what was needed” recapturing the gratitude and respect for life exemplified in this relationship is one of the layers of meaning “Pillars of Providence” conveys. The small butterfly above the horns of Buffalo suggests transformation and the new beginnings that have occurred within our cultures as we’ve passed through and left behind the power-lust and “not enough” attitudes of our hording and package focused culture.